Vertigo Chiropractor in Wichita Explains What is Meniere’s Disease 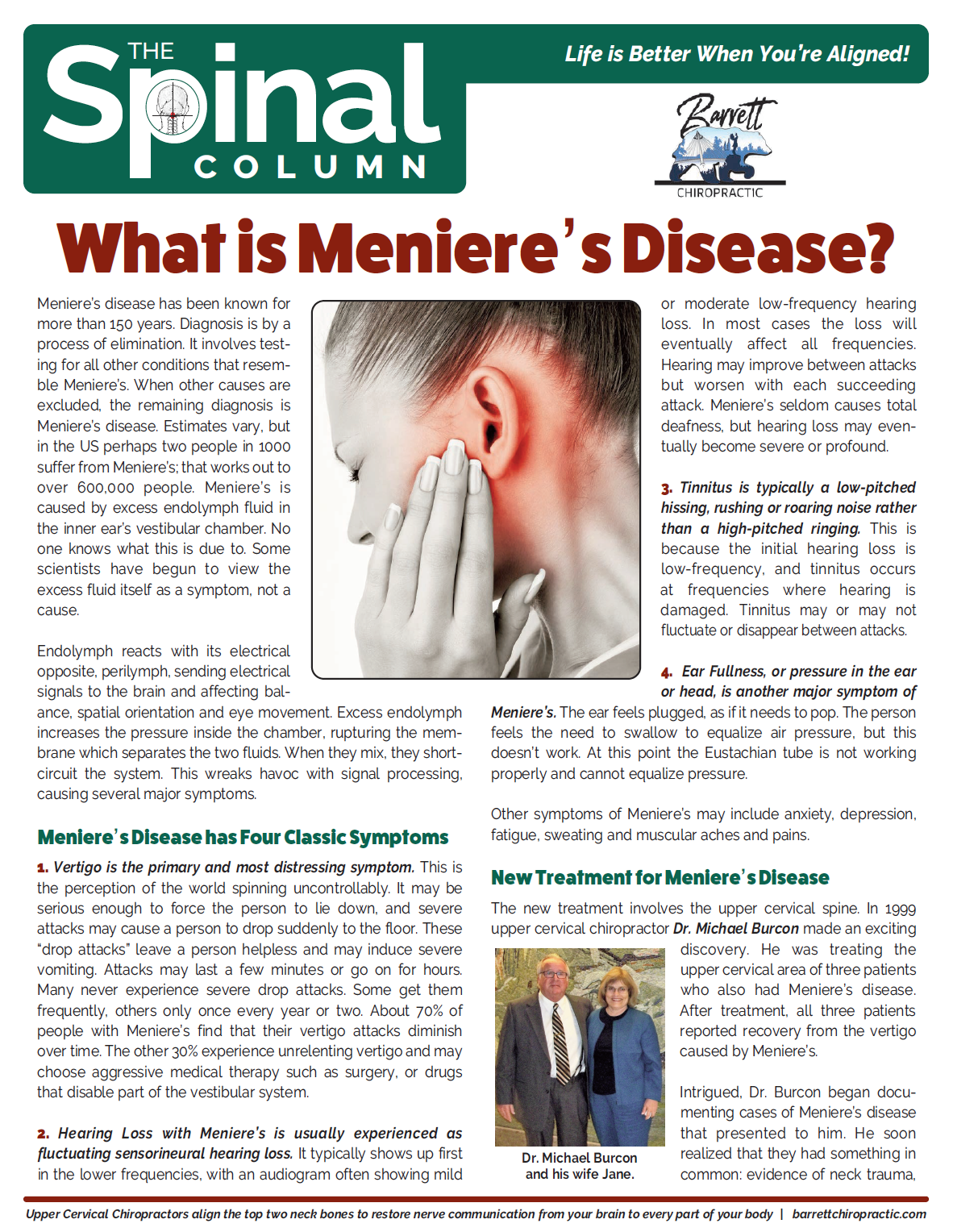 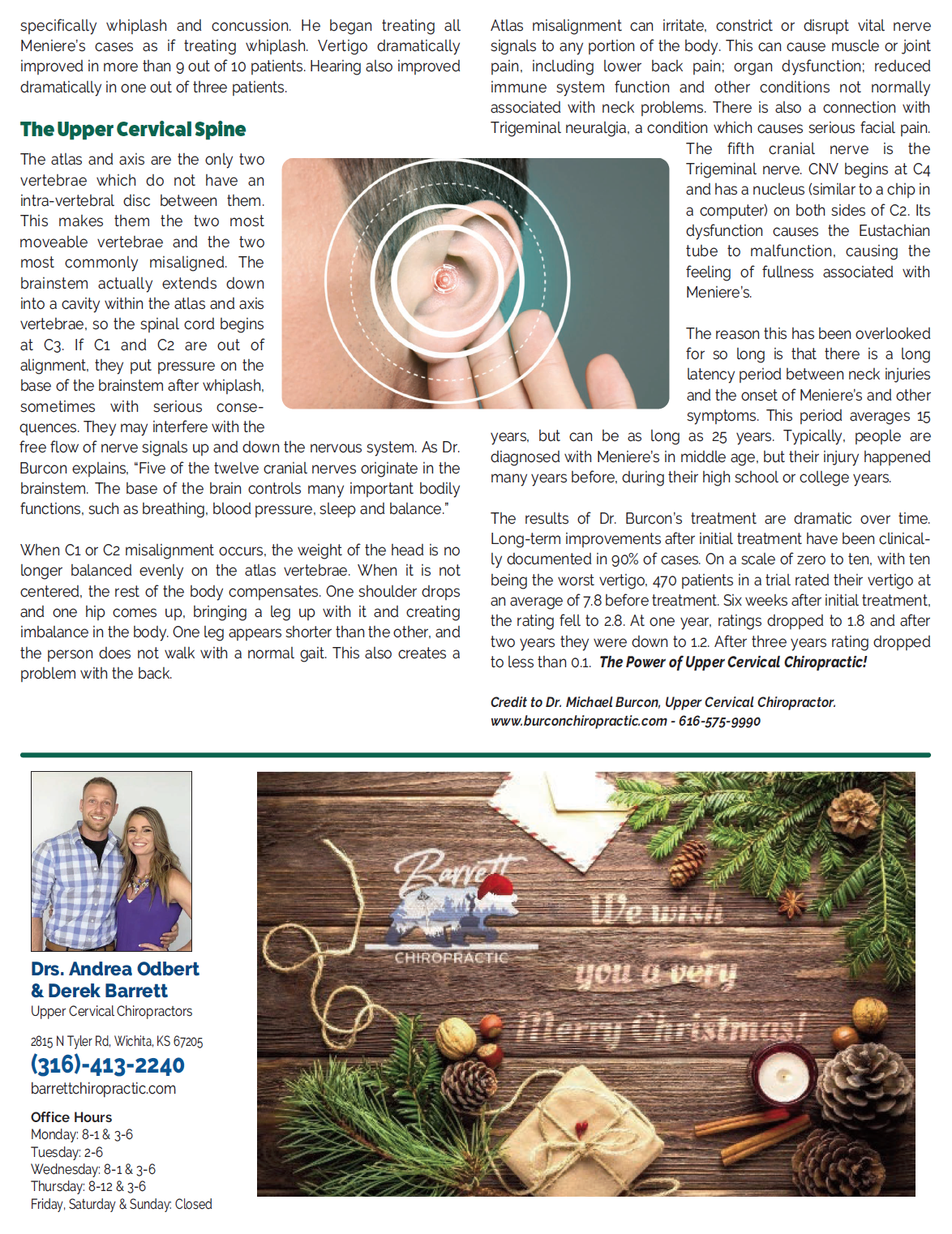 What is Meniere’s Disease?

Meniere’s disease has been known for more than 150 years. Diagnosis is by a process of elimination. It involves testing for all other conditions that resemble Meniere’s. When other causes are excluded, the remaining diagnosis is Meniere’s disease. Estimates vary, but in the US perhaps two people in 1000 suffer from Meniere’s; that works out to over 600,000 people. Meniere’s is caused by excess endolymph fluid in the inner ear’s vestibular chamber. No one knows what this is due to. Some scientists have begun to view the excess fluid itself as a symptom, not a cause.
Endolymph reacts with its electrical opposite, perilymph, sending electrical signals to the brain and affecting balance, spatial orientation and eye movement. Excess endolymph increases the pressure inside the chamber, rupturing the membrane which separates the two fluids. When they mix, they short circuit the system. This wreaks havoc with signal processing, causing several major symptoms.

1. Vertigo is the primary and most distressing symptom. This is the perception of the world spinning uncontrollably. It may be serious enough to force the person to lie down, and severe attacks may cause a person to drop suddenly to the floor. These “drop attacks” leave a person helpless and may induce severe vomiting. Attacks may last a few minutes or go on for hours. Many never experience severe drop attacks. Some get them frequently, others only once every year or two. About 70% of people with Meniere’s find that their vertigo attacks diminish over time. The other 30% experience unrelenting vertigo and may choose aggressive medical therapy such as surgery, or drugs that disable part of the vestibular system.
2. Hearing Loss with Meniere’s is usually experienced as fluctuating sensorineural hearing loss. It typically shows up first in the lower frequencies, with an audiogram often showing mild or moderate low-frequency hearing loss. In most cases the loss will eventually affect all frequencies. Hearing may improve between attacks but worsen with each succeeding attack. Meniere’s seldom causes total deafness, but hearing loss may eventually become severe or profound.
3. Tinnitus is typically a low-pitched hissing, rushing or roaring noise rather than a high-pitched ringing. This is because the initial hearing loss is low-frequency, and tinnitus occurs at frequencies where hearing is damaged. Tinnitus may or may not fluctuate or disappear between attacks.
4. Ear Fullness, or pressure in the ear or head, is another major symptom of Meniere’s. The ear feels plugged, as if it needs to pop. The person feels the need to swallow to equalize air pressure, but this doesn’t work. At this point the Eustachian tube is not working properly and cannot equalize pressure. Other symptoms of Meniere’s may include anxiety, depression, fatigue, sweating and muscular aches and pains.

The new remedy involves the upper cervical spine. In 1999 upper cervical chiropractor Dr. Michael Burcon made an exciting discovery. He was caring for the upper cervical area of three patients who also had Meniere’s disease. After the adjustment, all three patients reported recovery from the vertigo caused by Meniere’s. Intrigued, Dr. Burcon began documenting cases of Meniere’s disease that presented to him. He soon realized that they had something in common: evidence of neck trauma, specifically whiplash and concussion. He began providing solutions for all Meniere’s cases as if dealing with whiplash. Vertigo dramatically improved in more than 9 out of 10 patients. Hearing also improved dramatically in one out of three patients.

The atlas and axis are the only two vertebrae which do not have an intra-vertebral disc between them. This makes them the two most moveable vertebrae and the two most commonly misaligned. The brainstem actually extends down into a cavity within the atlas and axis vertebrae, so the spinal cord begins at C3. If C1 and C2 are out of alignment, they put pressure on the base of the brainstem after whiplash, sometimes with serious consequences. They may interfere with the free flow of nerve signals up and down the nervous system. As Dr. Burcon explains, “Five of the twelve cranial nerves originate in the brainstem. The base of the brain controls many important bodily functions, such as breathing, blood pressure, sleep and balance.”
When C1 or C2 misalignment occurs, the weight of the head is no longer balanced evenly on the atlas vertebrae. When it is not centered, the rest of the body compensates. One shoulder drops and one hip comes up, bringing a leg up with it and creating imbalance in the body. One leg appears shorter than the other, and the person does not walk with a normal gait. This also creates a problem with the back.
Atlas misalignment can irritate, constrict or disrupt vital nerve signals to any portion of the body. This can cause muscle or joint pain, including lower back pain; organ dysfunction; reduced immune system function and other conditions not normally associated with neck problems. There is also a connection with Trigeminal neuralgia, a condition which causes serious facial pain. The fifth cranial nerve is the Trigeminal nerve. CNV begins at C4 and has a nucleus (similar to a chip in a computer) on both sides of C2. Its dysfunction causes the Eustachian tube to malfunction, causing the feeling of fullness associated with Meniere’s.
The reason this has been overlooked for so long is that there is a long latency period between neck injuries and the onset of Meniere’s and other symptoms. This period averages 15 years, but can be as long as 25 years. Typically, people are diagnosed with Meniere’s in middle age, but their injury happened many years before, during their high school or college years.
The results of Dr. Burcon’s care are dramatic over time. Long-term improvements after initial adjustment have been clinically documented in 90% of cases. On a scale of zero to ten, with ten being the worst vertigo, 470 patients in a trial rated their vertigo at an average of 7.8 before care was administered. Six weeks after initial adjustment, the rating fell to 2.8. At one year, ratings dropped to 1.8 and after two years they were down to 1.2. After three years rating dropped to less than 0.1. The Power of Upper Cervical Chiropractic!
Credit to Dr. Michael Burcon, Upper Cervical Chiropractor. www.burconchiropractic.com – 616-575-9990

I’ve been suffering from Meniere’s for many years. The intensity and frequency of the Vertigo episodes have recently increased to the point that I have had difficulty functioning at work and at home. My wife discovered Barrett Chiropractic and the results of their adjustments have been remarkable. Dr. Barrett and Dr. Odbert are kind and compassionate. They explain the process and the adjustment and they possess great listening skills. If you are suffering from Meniere’s I would highly recommend You consider Barrett Chiropractic.